In-depth knowledge of the MTS curriculum is mandatory to strategize your exam preparations. SSC MTS syllabus 2023 is given below for Paper I, the first stage of the Examination. SSC MTS Paper I will have for sections which are General English General Intelligence and Reasoning Numerical Aptitude General Awareness. Tier 2 is a descriptive paper. The SSC MTS Syllabus 2023 is tabulated below.

This year, the commission is going to conduct the SSC MTS 2023 Exam with a new pattern involving only CBE and no Tier-2 Exam. The Syllabus for SSC MTS CBE has also been changed and divided into two sessions. The Staff Selection Commission will hold a competitive examination for the recruitment of Multi-Tasking (Non-Technical) Staff (in Pay Level-1 as per Pay Matrix of 7th Pay Commission), a General Central Service Group ‘C’ Non-Gazetted, Non-Ministerial post in various Ministries/ Departments/ Offices of the Government of India and various Constitutional Bodies/ Statutory Bodies/ Tribunals, etc.

Candidates who cleared stage 1 of the SSC MTS exam and also applied for the Havaldar posts in CBIC & CBN will have to go through the Physical Standard Test (PST) and Physical Efficiency Test (PET). Candidates can check the following details mentioned below in the table for the PST/PET as per SSC MTS Notification 2023.

Check minimum physical standards which is asked for the Halvadar posts in CBIC and CBN.

Note: Cycling is not applicable for the post of Havaldar in DGPM, CBIC. 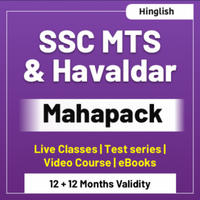 Q3. What is the syllabus for SSC MTS Paper I?
Ans. SSC MTS Paper I will have four sections: General English, General Intelligence and Reasoning, Numerical Aptitude, and General Awareness.